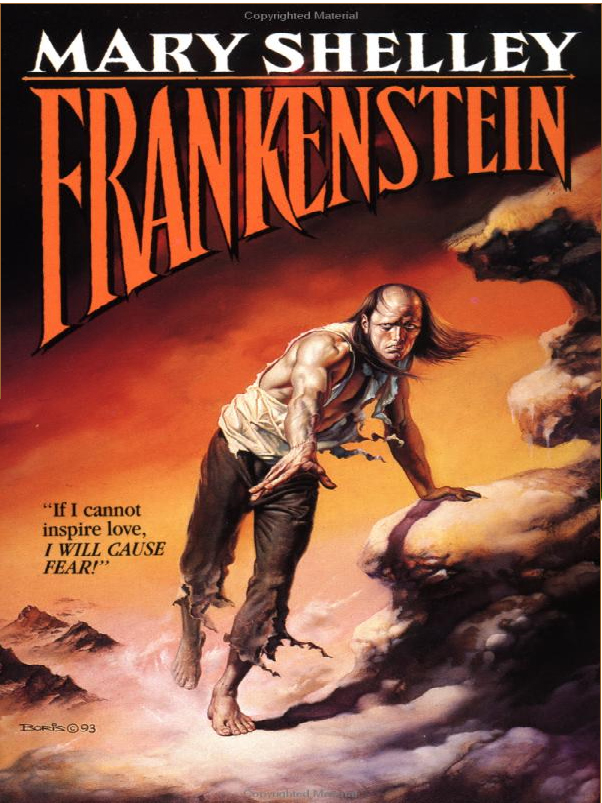 In the home stretch, and here are my takeaways on the end of the novel! Of course, I don’t really have much more to say, not about Vic all of a sudden becoming a self-righteous avenger of justice, dramatically appealing to “spirits” etc etc.  What a drama queen! I don’t have much to say about the showdown in the Arctic, either, except that Vic kills a lot of huskies trying to chase the Monster. Nope, not a whole lotta sympathy from me, gotta tell ya. It also looks like Captain Walton is developing a man-crush or more on Vic. Find another thing, Walton.

I wish above all to focus on this one passage, occurring at the scene of Elizabeth’s murder.

While I still hung over her in the agony of despair, I happened to look up. The windows of the room had before been darkened, and I felt a kind of panic on seeing the pale yellow light of the moon illuminate the chamber. The shutters had been thrown back, and with a sensation of horror not to be described, I saw at the open window a figure the most hideous and abhorred. A grin was on the face of the monster; he seemed to jeer, as with his fiendish finger he pointed towards the corpse of my wife. I rushed towards the window, and drawing a pistol from my bosom, fired; but he eluded me, leaped from his station, and running with the swiftness of lightning, plunged into the lake.

As I mentioned before, Frankenstein is a horror classic, and this passage doesn’t let you forget it. Do you still think Frankenstein is “lame?” Thanks to the 1931 film, we’ve been given an image of the Monster as a lumbering, sometimes loveable idiot, easily outrun by your 83 year old grandma. But what are we shown in the actual source material? An indelibly malevolent, evil grin taking delight in his creator’s fear and pain, something that German Expressionist cinema or makeup artist Dick Smith could have made into the stuff of true nightmares. And not just that, but a creature that’s fearfully fast, quick, possessed of an unearthly strength and power. This guy could break into your house and wait for you to come home, and he could escape in the blink of an eye after strangling you.

I hope the next person making a cinematic adaptation of Frankenstein takes note of this (in fairness, I think Mary Shelley’s Frankenstein of 1994 tried, but not to great effect).

If you have a burning desire to add this, or any other edition of Mary Shelley’s Frankenstein to your bookshelf, or to support this blog by browsing and shopping via this link, please consider clicking on the image below.