My friend and frequent podcast collaborator once said, “never get in a car with someone who’s been in Girls.” Sage advise perhaps for the young girl who co-stars with Allison Williams in M3gan. Then again, this latest Blumhouse horror joint depends heavily on Williams’s absolute lack of desire to be a parent. It is right for the sake of this story for us to get in her car have her take us on this ride.

END_OF_DOCUMENT_TOKEN_TO_BE_REPLACED

October 2, 2017 – If horror or science fiction can serve as a touchstone for ‘the times’, then perhaps the Sharknado franchise speaks perfectly to our political climate; its latest chapter, Sharknado 5: Global Swarming, most of all. With an alternate subtitle “Make America Bait Again”, it is tacky, it is reality-TV fueled, and most importantly, it serves as a platform, or better yet a trade exchange, for the Coin of the Realm: celebrity and ‘relevancy.’

January 8. 2022 – Scream 5, or simply “Scream“, is set to debut on January 14th. To celebrate, I’m reposting a 2011 article from when this blog was on Open Salon. This article earned me an Editor’s Pick (soon replaced by a much better article from another OSer). Edited from the original because my writing is trash.

“Scream 4” is opening this weekend, and oddly enough, I’m looking forward to it.  The burnout I had from dotcom era excess and self-referential teen horror is apparently gone.

Those were fun and weird and empty days, the late 90’s, full of partying and aimless misdirection.  I’m not sure I’m more “directed” now, but a big part of aimless misdirection is watching any movie you want, whenever you want.  This in turn led to the incessant consumption of the films in the wave of teen horror inspired by Scream.

We all know about the self-referential part of the Scream franchise.  All the genre tropes that the character of Randy deconstructs so cleverly set the stage for a 90’s horror renaissance that ran with slick production, knowing in-joke genre winks and a glut of up-and-coming It boys and girls.  It even managed to infect one of the top long-standing franchises of the genre from which it drew (Halloween H20).

END_OF_DOCUMENT_TOKEN_TO_BE_REPLACED

Welcome to Chillerpop’s inaugural Halloween 2021 Trick or Treat! For this project I asked friends far and…well, far…to pick a movie for me to cover in a blog post.

My friend Allan was the second person to reply to my prompt, but he’s going first! “Chef Al,” as he’s known on the excellent podcast Kiss The Goat, is armed with exceptional culinary skills and a vicious wit aimed straight at the throat of nasty-ass consumerist chain restaurant food.

Chef Al would like you to listen to the podcast Decoding the Gurus, for anyone needing to navigate or vet any “guru” they’re considering following or trusting – which is a fit for the film he chose, the 2016 horror comedy Another Evil.

“If you’re not averse to going low key,” he added.

END_OF_DOCUMENT_TOKEN_TO_BE_REPLACED

2021 has been quite a year thus far for all the things that get me. Netflix aired the documentary “Sons of Sam” which leans into the satanic panic conspiracy theories espoused by Maury Terry in his book “The Ultimate Evil.” And then, the forces behind the theatrical juggernaut Conjuring-verse have resuscitated the “Devil Made Me Do It” case, which loomed large in my 80’s Connecticut-based childhood.

I’ve waxed plenty nostalgic about it here, and though I want to avoid rehashing what I’ve already said countless of times ad infinitum, I will need to revisit the trial of Arne Johnson, Gerald Brittle’s rotten book “The Devil in Connecticut,” and our sainted paladins of the paranormal, Ed and Lorraine Warren.

END_OF_DOCUMENT_TOKEN_TO_BE_REPLACED

As The Conjuring 3 has it’s box office and streaming premiere this weekend, I am dusting off this old blog post about the first filmic adaptation of Brookfield, Connecticut’s infamous ‘The Devil Made Me Do It’ case. I was a young middle schooler growing up in a town 15 minutes away by car, in the thick of the satanic panic haunted 1980s, and this looms large in my psychic landscape.

I will also reiterate my belief in, and support of, Carl and David Glatzel. Exploitation by the Warrens is a thing, satanic panic has ruined lives, and I hope the Conjuring crazed public will leave them alone.

END_OF_DOCUMENT_TOKEN_TO_BE_REPLACED

[NOTE: Welcome to Chillerpop’s 31 Days of Halloween 2020! As if this year needed more inconceivable horror! It doesn’t, but maybe some nostalgia and escapism will help? Yes, nostalgia for…an economic crisis. This blog, you see, began in the midst of the subprime mortgage crisis of 2008.

This month, mostly because I am lazy, I will repost some blogs from my original Open Salon page. These posts will be badly written, badly edited, and extremely out of date.]

Chicago’s WildClaw Theatre is adapting Willliam Peter Blatty’s novel “Legion”, the basis for his 1990 film “Exorcist III” as a stage play.  I think this is an excellent opportunity to keep a purer vision of the source material in the face of audience and studio expectations of what a horror film should be.

END_OF_DOCUMENT_TOKEN_TO_BE_REPLACED

Feliz Dia de los Muertos! I hope this day gives you much wonder, and that you remember – or commune with the spirits of – your loved ones beyond the veil.

Since I began my correspondence with the folks at It’s Playing, Just With Research, I’ve been obsessive about chasing down every last possession/exorcism movie out there. That’s how the terrific Mexican horror film El Habitante (The Inhabitant), came to my attention. I had a deep fear as I began this movie: that it would be as rote and derivative as 99.6% of all modern exorcism films since the release of The Exorcism of Emily Rose.

I was happily wrong. END_OF_DOCUMENT_TOKEN_TO_BE_REPLACED

October 18, 2017 – This film is going to be talked about for quite some time. It’s intense, original, and defies many, many expectations. It will probably get backlash, mostly by virtue of having to be packaged and marketed alongside Saw 12, Curse of Chucky or Paranormal Activity 45. I hate to summon the dreaded “post-horror” category, but A Dark Song could be comfortably placed there. I don’t care over-much, but you can call it “horror” in the same way that a quiet ghost story like The Haunting or The Others is horror. END_OF_DOCUMENT_TOKEN_TO_BE_REPLACED 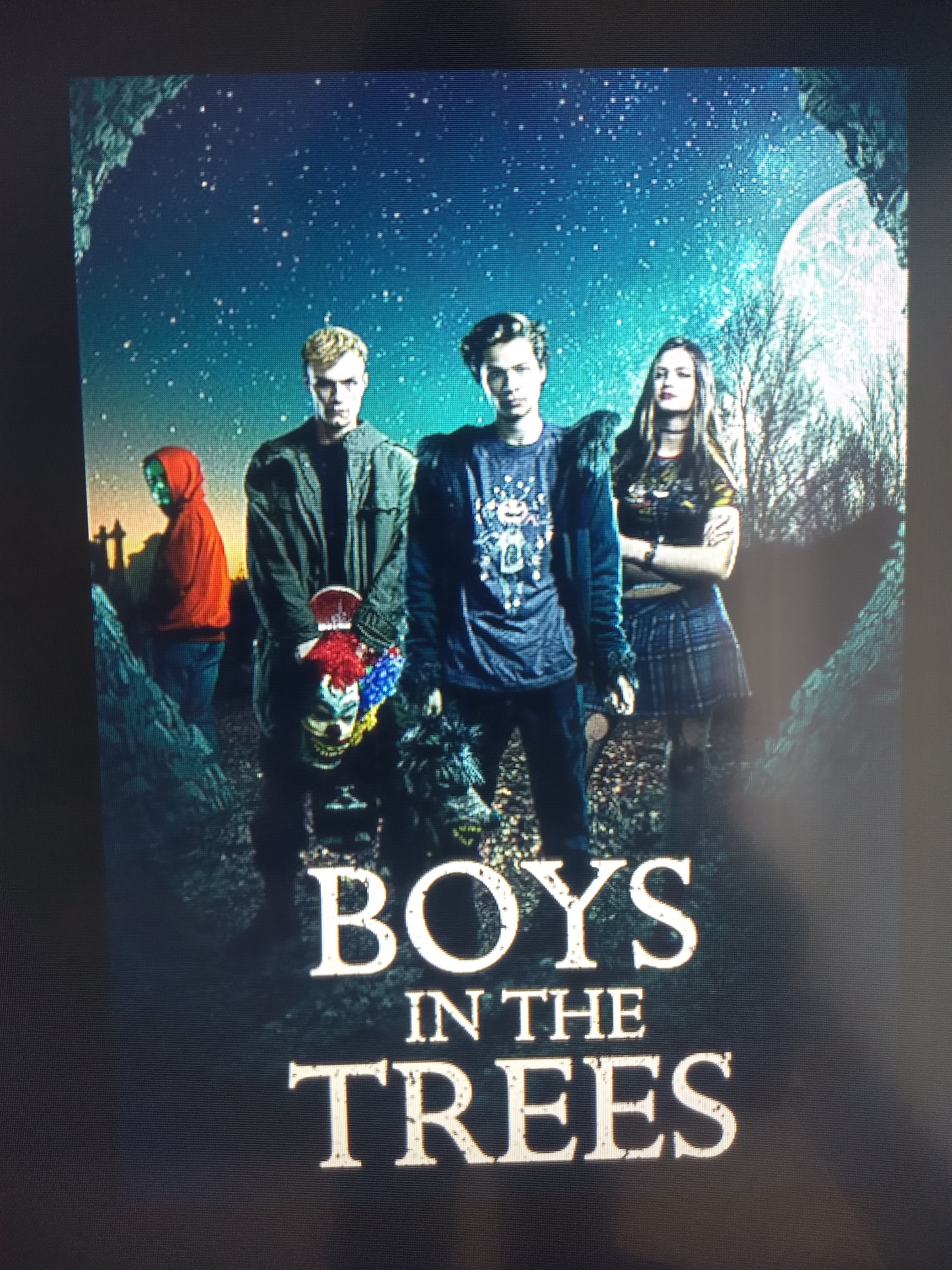 There is a category of fiction out there called “horror adjacent,” mostly applied to movies that might feature supernatural horror elements but whose storyline itself isn’t actually horror. Some of these could fall in with ‘horror-comedy;’ others with fantasy, and another set, like Australia’s Boys in the Trees, defy easy classification.