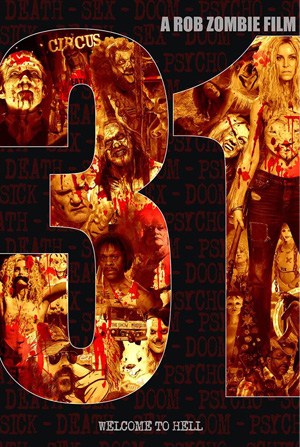 Plot: It’s Halloween, 1976, and a group of skeevy carnies are driving their van through the desert. After encountering a sinister roadblock and a gang of masked kidnapper-murderers, they awaken to find themselves in 31, a sadistic kill-or-be-killed game that pits its victims against inventively gruesome psychopathic clowns with motifs like ‘Sick-Head’, ‘Sex-Head’ and more.

Like the majority of his work, Rob Zombie’s “31” is an unrelentingly brutal Impressionist white trash nightmare. Meant to be an adrenaline-fueled gorefest, it’s actually haunting and thought provoking once you process it. Maybe it shares themes with other films about death games and gladiatorial combat, but it’s spiritual parent is definitely “The Texas Chainsaw Massacre.”