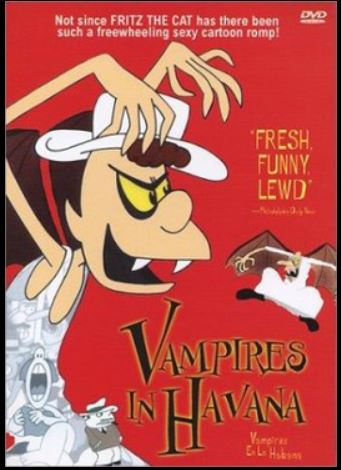 I remember very distinctly reading this 1987 New York Times blurb on the Cuban animated film ¡Vampiros En La Habana!. And in the years from 1985 to 1990, vampires had turned the corner, for me, from something to fear (yes, I was very much afraid of Dracula and his brethren as a child) to something alluring and powerful. “The Vampire Lestat” was ubiquitous on the bestseller lists, The Lost Boys promised a world of eternal youth and rock and roll, and the Marvel graphic novel “Greenberg the Vampire” was an erotic fever dream I couldn’t comprehend but just went blam in my hormone-addled seventeen year-old mind.

I had thought all the while that Vampires in Havana was one of those sexy Nelvana adult animated movies, like Heavy Metal, Fire and Ice, or American Pop. But I finally took it in this, the year 2019, and discovered its a goofy, weird stylized film, with sophomoric sex and some terrific music.

And then there’s the Cuban revolution. END_OF_DOCUMENT_TOKEN_TO_BE_REPLACED