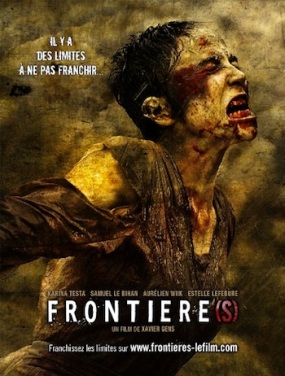 I’m not a gorehound, but when I heard the Faculty of Horror’s podcast episode on the New French Extremity movement I knew I had to delve (Alexandra West, podcast co-host, has written a book extensively covering these films.)

I was hoping to watch the original Martyrs, as its premise sounds mind-blowing, but I went for the low-hanging streaming fruit, Frontière(s) on TubiTV. Nazis are no longer quaint wrong fun for horror movie subject matter, so I wasn’t totally in the mood.

Now, NFE movies don’t typically fuck around; they will deliver some of the most shocking, nihilistic moods you can see anywhere. Frontière(s) opened with an abortion and the main protagonist declaring that this was no world in which to bring a baby forth. Opening salvo?

Frontière(s) (2007)
Director: Xavier Gens
Writer: Xavier Gens
Notable Cast: Karina Testa, Aurélien Wiik, Samuel Le Bihan, Estelle Lefébure, David Saracino, Chems Dahmani, Adel Bencherif, Maud Forget, Amélie Daure, Rosine Favey, Joël Lefrançois, Patrick Ligardes, Jean-Pierre Jorris
Plot: In Paris, during the riots due to the election of a conservative candidate to the presidency of France, a group of four muslim small-time criminal teenagers from the periphery; Alex, Tom, Farid, the pregnant Yasmine, and her brother Sami, plan to run away from Paris to Amsterdam with a bag full of robbed money. However, Sami is shot and the group split up, with Alex and Yasmine going to the emergency hospital with Sami while Tom and Farid head to the border with the money. Tom and Farid decide to stop in a bed and breakfast nearby the frontier, and are hosted by Gilberte and Klaudia that offer free room and sex to the newcomers. They call Alex and Yasmine who are fleeing from Paris to join them in the inn. But soon they discover that their hosts are sadistic cannibals of a Nazi family led by the deranged patriarch and former SS officer and Nazi war criminal Le Von Geisler who plans to make Yasmine the brood mare for a new Aryan master race. (Source: Imdb.com, written by Claudio Carvalho)

Commentary: I’m of two minds regarding this film. It has the oppressive weight of NFE’s nihilistic brutality complete with important underlying themes. But it is also ridiculous, trashy camp and I’m not sure it (are films sentient entities?) is willing to admit this. If you laughed at certain points, you are well justified.

It begins with something of a societal break-down where we’re told, not shown, that an ominous right wing government is now in charge. We’re then introduced to our main characters, the crew of French Muslims anchored by Yasmine who is pregnant by her boyfriend. These are not likeable characters – they’re obnoxious, violent and at times amoral.

This is a good thing, by the way. Narratives about fascism always tend to sentimentalize the virtue and goodness of its victims. Under what circumstances are you going to allow it to creep up?

By the time the Nazi clan and their cannibal torture shenanigans are in full swing, I was uncharacteristically looking for logic where there was none. Okay, yes, Nazis are by nature stupid, but why would they choose Yasmine to bear their children? She is no Nazi’s idea of racial purity (a compliment to her, I assure you.)

Essentially, the Nazi clan are absurd, surreal cartoons with little rhyme or reason behind them. Frontière(s) owes Tobe Hooper a check or perhaps a film credit. The Texas Chainsaw Massacre had plenty to say about American society but does its iconography work in this particular French context?

What We’re Afraid Of: It’s funny to hear the dialogue of Tom and Farid at the inn, before they are attacked by the Nazi clan owners. Viewing the current events of the controversial French presidential election, they remark something to the effect of “now we’re like America” or “Now we have our own Bush.” This is a 2007 movie and while we in the U.S. were completely oblivious to Dick Cheney’s horrific war, the rest of the world was scared.

Aha! As I write, an epiphany hits me! Frontière(s) is prescient!

Gens could have constructed his film around the political, surface, legitimately elected right-wing threat the film led with (= the Dick Cheney administration), but the story then became about clan of inbred, disgusting, exaggerated, ridiculous, cartoonish idiot Nazis (= our current president!)

Alexandra West notes that Frontier(s) is “about the evolution of the extreme right in France,” and that it explores the “untended elements of society, the sections which are allowed to remain in realities that no longer exist in urban settings.”

If you have a burning desire to add Frontière(s) to your video library, or to support this blog by browsing and shopping via these links, please consider clicking the image below: