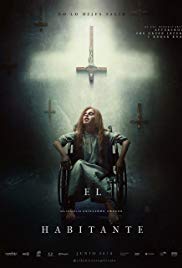 Feliz Dia de los Muertos! I hope this day gives you much wonder, and that you remember – or commune with the spirits of – your loved ones beyond the veil.

Since I began my correspondence with the folks at It’s Playing, Just With Research, I’ve been obsessive about chasing down every last possession/exorcism movie out there. That’s how the terrific Mexican horror film El Habitante (The Inhabitant), came to my attention. I had a deep fear as I began this movie: that it would be as rote and derivative as 99.6% of all modern exorcism films since the release of The Exorcism of Emily Rose.

I was happily wrong.

Commentary [WITH SPOILERS]: What that rather thin plot summary from imdb.com neglects to tell you is that the secret the sisters encounter is the family’s young daughter, Tamara, possessed by a vicious demon, kept behind a locked door and strapped to the bed.

Already one might think ‘meh, another Exorcist ripoff,’ but stick with it, it pays off. El Habitante very deftly mixes two horror sub-genres: demonic possession and home-invasion-gone-wrong. If you see my entry for South Africa, that’s a similar example that’s not as effective.

The would be thieves (committing this robbery out of some unspecified, dire need) have broken into the house of a powerful Mexican politician with connections. Before discovering the girl, they tie him and his wife up. After discovering the girl, the ringleader, Camila initially believes her to be abused and, flashing back to her family’s history of abuse at the hands of a sick, highly religious father, is determined to help her. Actress Vanesa Restrepo gave Camila a hard, bitter and tragic edge, and I loved her performance.

Already, it’s not looking like an average exorcism movie, and the twists don’t stop.

The demon speaking through Tamara ends up tormenting the sisters, two of them to their doom. Young Natasha Cubria belongs in the pantheon of possessed children on film headed by Linda Blair. For most of the movie, the demon uses the little girl’s voice, eschewing cheesy electronic vocal effects or masculine feral voices. This is VERY effective, especially since the demon spends most of its time emotionally tormenting instead of supernaturally attacking its victims.

‘Mix lies with the truth’ is what Pazuzu did; the demon inside Tamara pretty much just sticks to the truth, which reveals the sisters’ tragic and emotionally harrowing past.

Twists continue, involving Tamara’s parents and the Catholic Cardinal Pedro Natale, who comes to exorcise the girl once and for all after 10 previous attempts.

What We’re Afraid Of: We’re afraid of a mix of things here. An obvious one: economic anxiety, which many horror movies code for but here, it’s explicit. There’s some sort of desperation that makes the sisters commit a robbery.

We’re also afraid of religion and God in this film, but that gets resolved, and in a satisfying way that doesn’t reinforce an oppressive moral code. The sexual abuse experienced by the sisters is combined with heavy-handed, almost Opus Dei style religious fervor on the part of the father. [HEAVY SPOILER] The movie’s biggest curve ball is that Tamara’s parents blame God for not helping their daughter, who had a terminal illness, and thus induce a possession so that the demon will cure the cancer.

Many possession/exorcism films want you to go back to church following a crisis of faith. This one does too, but our heroic religious leader, Cardenal Natale, ended up showing proper Christian compassion to the sister that became a Final Girl. In addition, he cites some lost lore (most likely made-up? must look into it) that grants anyone the power to be an exorcist. He gave his religious power and authority over demons to a young woman. This is something the Catholic Church is notorious for refusing to do. (Indeed, the Cardinal does imply many things about Satan being within the Catholic Church, and the old quote about the greatest trick the devil ever pulled, a theory that runs rampant within many strains of highly fundamentalist Catholicism.)

If you have a burning desire to support this blog, please consider browsing and shopping by clicking the image below: