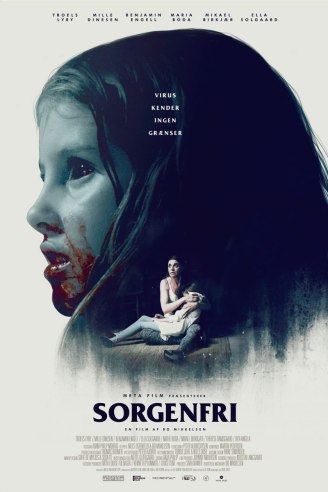 As a fan of many things Nordic, I was pleased to see that Denmark has a zombie apocalypse film all its own. Even better, it takes place in a sleepy suburb of Copenhagen (Sorgenfri, the film’s original Danish title), filled with attractive people. As it begins, it is bucolic and sunny and very pleasantly ordinary. It could have easily fallen into some quiet Euro coming-of-age story or family drama, but of course, that’s not where the path takes you. You know, of course, based on the blurbs, that the path is to a zombie movie. And what I would have loved was a different branch of that path. To explain this point I will need to move up the “what we’re afraid of.”

What We Become (Sorgenfri) (2015)
Director: Bo Mikkelson
Writer: Bo Mikkelson
Notable Cast: Mille Dinesen, Troels Lyby, Benjamin Engell, Marie Hammer Boda
Plot: The film follows a family of four living in the idyllic suburb of Sorgenfri. However, the family’s life dramatically changes after a mysterious virus erupts in the city. Suddenly, survival is the main focus, and the family will have to find the strength to fight through the crisis. (source: Wikipedia)

What We’re Afraid Of: There is a small anecdote offered by doofy, distracted but lovable dad Dino (Troels Lyby), something to the effect of “a stadium collapse back in the 1980’s resulted in hundreds of deaths by stampede because people didn’t listen when they were urged to remain where they were and not panic. The teenage son, Gustav, replies: “well, they were going to get crushed to death if they stayed.”

The plot of this movie is driven by the (presumably) Danish government and its communications to the residents of Sorgenfri.

It should be noted that the government forces trying to contain the outbreak are framed very sinister, so much so, that for a long moment, I thought this movie would be ambiguous as to whether or not there even was a zombie outbreak. The actions they take almost matching a Nazi occupation complete with citizen roundups and corpse bulldozing.

Do you trust their information, or do you trust your every last instinct that tells you to get the hell out of there immediately? By the end of the movie there’s arguments for both.

That would have been an interesting exercise, to me – a zombie apocalypse film where the possibility that there are no zombies exists.

Commentary: I enjoyed the performances here. Lyby does a great job as the placid, anxiety free patriarch, happy to trust what he’s told until its too late. Mille Dinesen played his exasperated wife Pernille, who you could argue had the right levels of paranoia and concern lacking in her happy-go-lucky husband. Benjamin Engell plays the teenaged son Gustav, a kid with hearthrob looks who keeps pushing his parents, a bit creepy in the way he stalks his pretty new neighbor Sonja. I don’t think the zombie horror was executed all that well, but was it even the point of the story?

Chillerpop takes your questions and comments here on this blog, on his Facebook page, and on Twitter (@ChillerPop).
If you have a burning desire to add What We Become to your video library, or to support this blog by browsing and shopping via these links, please consider clicking the image below: