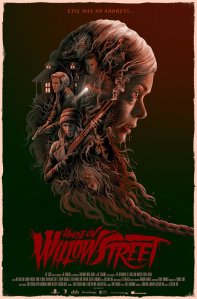 The House on Willow Street is a Netflix original whose production credits originate in South Africa. If that fact wasn’t in the film’s IMDb credits, I’d probably be clueless. None of its mostly white cast speak with any sort of accent (perhaps one member of the central team of thugs?) and there were no specific references to the location where most of the action took place – except for one.

As I understood it, the house where the demonic evil was spawned is “at the exact opposite geographic location as the Vatican.” I guess, if you were to dig that hole to China at the Vatican, you would end up at the titular Willow Street residence. If that’s as spooky to you as an inverted cross or a religious blasphemy from a demon, this movie might be your jam. It wasn’t mine.

The House on Willow Street (2016)
Director:
Writer:
Notable Cast:
Plot: A group of four good looking but rather empty petty criminals carry out their plot to kidnap and ransom the daughter of a wealthy family that has somehow personally wronged them. The daughter makes with the Linda Blair moves and their scheme goes haywire.

Commentary: Sometimes, when I get in a snarky zone, I actually CAN do a plot recap.

This wasn’t a good movie. I choose to believe these actors have talent, and were just thoroughly uninspired by the script they were paid to recite. As the possessed kidnap victim Katherine, Carlyn Burchell looked like she was having some fun, at least. But the dialogue – a lot of action movie quips and some cliché relationship talk – was clunky and leaden, and the characters as interesting as peeling paint.

The story itself was also a bland retread of other movie plots, and part of a sub-genre that has seen some spotlight in the past three years (more on that in “What We’re Afraid Of”.) The supernaturalism and the crime caper aspects of this story didn’t fit together comfortably and the ending couldn’t come soon enough. For genre fans that just enjoy pure horror moments and could care less about the actual story, there are some fun jump scares, a few moments of gore, and a good, if pointless, effects sequence with tentacle tongues when the demon stops acting like a demon and more like the creature in The Thing.

What We’re Afraid Of: I mentioned before some religious inversion/blasphemy that’s common in devil movies. In actual truth, the exact geographically opposite point on the globe to the Vatican is deep beneath the Pacific Ocean. But regardless, as creative as that idea may be, if The House on Willow Street was trying to make us afraid of the devil and get us all back to church it didn’t do a good job.

In one scene, the Catholic priests, following what appears to be a failed exorcism, actually try to burn the possessed alive!

The movie is an example of the “home invasion gone wrong” sub-genre, which appeals to an audience’s sympathies for the criminals as opposed to the invaded. Don’t Breathe and El Habitante (the latter which will be reviewed on this blog) are better examples. These movies typically feature economic anxiety, a very common theme in horror. Our protagonists seek to stick it to The Man, as it were, and in The Man’s lair some supernatural horror is actually present.

I also wonder whether or not movies in this genre are working out some sort of a revenge fantasy on burglars and home invaders, a problem reported in many nations including South Africa. This problem is of course filtered through our media and through centuries of specific political viewpoints (it’s entirely possible that South Africa has had no less rate of violent burglaries than the United States, if we consider who has been doing the reporting, and how.)

Chillerpop takes your questions and comments here on this blog, on his Facebook page, and on Twitter (@ChillerPop).
If you have a burning desire to add The House on Willow Street to your video library, or to support this blog by browsing and shopping via these links, please consider clicking the image below: