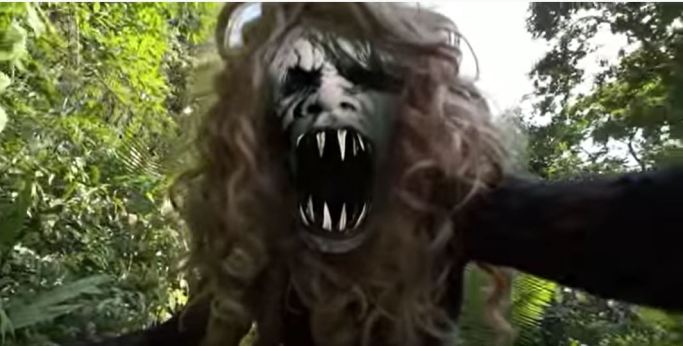 It’s a look, isn’t it? This is the Xtabay (portrayed by actress Shelley Glionna).

A Belizean movie was available on YouTube, and I was overjoyed. Belize is a Central American and Caribbean nation I know little about, and in this blog project I really wanted horror movies from countries with little representation in international cinema.

I was even more excited to find that it was titled 2012: Curse of the Xtabay. Mesoamerican anthropology is a passion of mine. Imagine the things this could have brought together? 2012, an auspicious and apocalyptic year in the ancient, classic Maya calendar (and source of anxiety for many people during the exact year). Belize, with its amazing ethnic diversity and large populations of Mayan-speaking people. The Xtabay, a name only familiar to me because of Yma Sumac, the vocal powerhouse diva whose album, Voice of the Xtabay, is my favorite thing to play when I want some peace and quiet.

Some Googling of the Xtabay reveals the following (https://en.wikipedia.org/wiki/Xtabay):

La Xtabay is a Yucatec Mayan myth about the Xtabay. The Xtabay is a female demon originating from a Mayan legend who has ill intentions towards men.[1] She dwells in the forest to lure men to their deaths and, according to those that have escaped her, she possesses incomparable beauty and evil.[2] She has beautiful black shiny hair that falls down to her ankles.[3] The Xtabay resides in the Yucatán Peninsula.[3]

2012: Kurse a di Xtabai (Curse of the Xtabay) (2012)
Director: Matthiew Klinck
Writer (s): Miriam Antoinette-Ochaeta, Arran Bevis, Nicasio Coc, Robert Grieg, Roseli Hernandez, Nehanda Higinio, Jeffery Louis Lopez, Memory Magdaleno, Edgardo Serrut,
Notable Cast: Miriam Antoinette-Ochaeta, Arran Bevis, Nicasio Coc, Ian Flowers, Shelley Glionna, Robert Grieg, Esmeralda Hernandez, Roseli Hernandez, Nehanda Higinio, Memory Magdaleno, Edgardo Serrut
Plot: A sealed ancient Mayan cave would be blown open unleashing Xtabai to wreak havoc on the world and destroy civilization. She begins by infecting the inhabitants of a nearby village with a terrible and deadly fever. The government responds by placing the village under quarantine. A team of students along with their teacher escape into the jungle to find a cure, guided only by a dream. They go deep into the bowels of the Mayan underworld, hunted by Xtabai herself. Will they ultimately succeed in defeating the evil Xtabai and saving mankind from her curse? How many will live to tell the tale? (source: IMdB)

Commentary: This movie is weird, amateurish and endearing. From what I can gather, much was ad-libbed and done on the fly, and despite that it still manages some cohesion and story structure. The special effects are awful – check the wires on the flying Xtabay – and thus are a wonderful treasure that brings a smile to my face. Many of the performances are from first-time actors, and their natural, earnest approach to their line delivery I found refreshing and charming. Let me note Nehanda Higinio, who had a lot of presence as the heroine and Final Girl. I’d love to see her in more movies!

It’s also important to summarize some of the production notes of this feature. It is 100% in the English Creole language of Belize, and not at all difficult to follow without subtitles, although they help. As I mentioned, the cast is all Belizean and much of the script is improvised. Director Matthiew Klinck was a Canadian expat in Belize; tragically, he was found murdered in his home in 2016.

What We’re Afraid Of: The Xtabay legend and demoness turns out to be very fascinating. It is a tale of two sisters: one, humble, charitable, concerned with the poor, and also notably promiscuous; the other, beautiful, virtuous but mean and cold hearted. The latter became a vicious demoness to lure men to their doom. A reverse final girl?

You would think that with all the anxieties about female sexuality, that this would be at the root of the movie’s terror – but, Xtabay in this movie is basically a flying prop that shrieks like a pterodactyl.

It’s in Nehanda’s story that you see some interesting things – her prophetic dream speaks to destiny. Also, like in the film for my entry for Denmark, there is some government related horror – the attempts to contain the horrible curse result in a sad tragedy for Nehanda and her family.