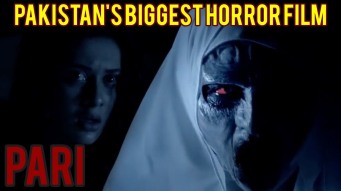 It’s official: James Wan’s Conjuringverse has set its stamp on global horror cinema. A lot of the foreign horror films coming across my streaming platforms are taking the formula of haunted abodes, nuclear family, demonic evil and resolution by faith, and placing it within their own cultural context. At least that’s how it seems to me; hopefully I’m wrong and there’s a wealth of horror cinema telling all kinds of different stories.

To my highly-limited knowledge horror movies from Pakistan are rare, and I was happy to checkout Pari, currently streaming on Netflix.

In the opening credits of the movie, we see that it is “a tribute” to Khwaja Sarfaraz, director of a 1967 horror movie called Zinda Laash, who apparently faced censorship problems. It is also billed as “Dracula in Pakistan” and it looks delightful. Here on YouTube you can see a music and dance sequence from it which groovy as all get out!

Pari (2018)
Director: Syed Atif Ali
Writer: Syed Atif Ali, Ahsan Muhammad
Notable Cast: Junaid Akhtar, Azekah Daniel, Khushi Maheen, Saleem Mairaj, Qavi Khan
Plot: Shehram is a writer – I believe, of horror, with a secular bent. He moves to a house in the mountainous countryside with his wife Mehwish and his young daughter, Pari. Soon, spooky haunted things begin occurring in the house. And just what, exactly, is the matter with Pari?

Commentary: I did it! Another 100% original plot recap that wasn’t a chore!

I was excited to watch a Pakistani horror film. Pari’s good moments are interesting, and some of its worst moments are enjoyable on the “so bad its good” scale. Think The Manitou.

Pari is one-half The Conjuring (complete with a blatant Valek the Nun rip-off), one-fourth The Shining (complete with a writer losing his mind and beautiful shots of forested, secluded scenery, one thing the director did well,) and one-fourth The Omen. It’s a lot and it comes together very clumsily. As Mehwish, the lovely Azekah Daniel unfortunately didn’t have much range, but then her character was very infantilized. As the titular Pari, the young Khushi Maheen did a great job being her country’s answer to Damien Thorne. There was also the bizarre, overlong subplot with the crazy homeless guy character Abdullah – more on that later.

Pacing is off all over the film, but particularly, in the beginning, where we are not settled into any sense of family normalcy. Immediately after opening credits, spooky music and moving objects begin assaulting our senses. Not an effective build-up. We simply continue to get bombarded with best-of-The Conjuring moments until a flashback sequence takes us to Abdullah. The transition to this sequence is where the movie has something to offer – namely, surreal and dreamlike atmosphere (a slow widdershins spin around a large tree).

Other moments of note: Shehram, the patriarch of the family, has a mentor, a bumbling slightly comic-relief ‘Professor’ whom Shehram venerates. We are then treated to a prolongued haunting and stalking sequence, which is weird, overlong and unique. In the western horror film this would be where the hot girl is chased and killed.

Now, after this death, we are shown a grief montage set to music. The montage is overwrought and dedicated to a character we’ve no real reason to care about. However, the music used for this sequence is entrancing and gorgeous. A little digging led me to uncover the song on YouTube:

I learned that the song’s title is “Khaki Badan.” The clip also describes it as a ‘Sufi’ track, and please, if anyone can confirm if this is in fact ‘Sufi’ and what that means in the context of Pakistani society, I would be deeply appreciative. At one point Abdullah, who is creep-stalking Shehram’s family, is described as a ‘heretic,’ and he seems to be part of some commune led by one ‘Baba.’ I want to know more!

I’m also interested in how Western cinematic ideas of Satan, demonology and the occult might intersect with horror fiction from different faiths. I noticed this in a few of the Indian horror films I watched, ostensibly approaching the subject matter from a Hindu perspective. Pentagrams, a birthday of ‘6-6-16’ are all elements of cheesy devil movies from the North America and Western Europe. But James Wan’s influence is all over Pari, so it is not terribly surprising.

Finally, its worth noting the film’s finale [HEAVY SPOILERS]. Little Pari demons out, and I could only cheer for this poor kid stuck with such a joyless and inept family. I don’t care if she was a demon, this kid ain’t having her mom and dad’s nonsense! She levitates and attacks with a telekinetic, pyrotechnic panache that brought a smile to my face and allowed me to bask in the psychotronic bad cinema that has always been a comfort to me.

What We’re Afraid Of: All together now:

Q – What are Conjuring-type movies meant to do?

A – Get butts back in church.

Or the mosque, in this case. In one scene, Mehwish implores her secular husband to pray and have faith. She seems to blame his lack of it for the hauntings around her.

But hey Mehwish, that ain’t the whole story, is it? Mehwish uses a black magic book to correct a tragedy, with ensuing results. Don’t keep black magic tomes in the house, and watch your kids better, because parenthood, it’s a bitch and sometimes your kid WILL be a little terror.

Chillerpop takes your questions and comments here on this blog, on his Facebook page, and on Twitter (@ChillerPop).
If you have a burning desire to support this blog by browsing and shopping via these links, please consider clicking the image below:

2 thoughts on “Around the World in 31 Days: Pakistan”