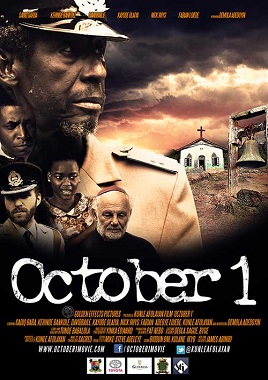 Welcome to Chillerpop’s Around the World in 31 Days blog project. See what I did here? October 1 on October 1.

One thing I was very excited to do with this project was to watch and reflect on horror films from lands and countries far removed from me. I did a lot of research on what horror films from African countries are available and worth watching. Nigeria came up a lot, as there is a ‘Nollywood’ industry. There is a zombie movie named Ojuju that looks quite good and has received acclaim. Alas, not available to any of my streaming means, but, October 1 is available on Amazon Prime.

And so we begin with a film that has horror elements but probably skews towards the psychological thriller side, and what’s more, offers us a window into the conflicts and tensions facing Nigeria on September – October of 1960, the eve of its independence from Great Britain.

October 1 (2014)
Director: Kunle Afolayan
Writer: Tunde Babalola
Notable Cast: Femi Adebayo, Ademola Adedoyin, Kayode Aderupoko, Kunle Afolayan, Abiodun Aleja, David Bailie, Kehinde Bankole, Ibrahim Chatta, Sadiq Daba, Ifayemi Elebuibon, Kanayo O. Kanayo, Fabian Adeoye Lojede, Bimbo Manuel, Colin David Reese, Nick Rhys
Plot: It’s September 1960, and with Nigeria on the verge of independence from British colonial rule, a northern Nigerian Police Detective, DAN WAZIRI, is urgently despatched by the Colonial Government to the trading post town of Akote in the Western Region of Nigeria to solve a series of female murders that have struck horror in the hearts and minds of the local community. On getting to Akote, more murders are committed, and with local tension high and volatile, Waziri has a race on his hands to solve the case before even more local women are killed. Set against the backdrop of the national celebratory mood of the impending independence, Waziri is pulled into a game of cat and mouse as he and the killer try to outwit each other…(source: Letterboxd)

Commentary: I enjoyed the time I spent with this film, but it is some work. At close to two and a half hours, it requires intense focus. I had to break up my viewings to 15-to-20 minute intervals over a week. At times the movie has the feel of a teleplay, soap opera or even a kitchen sink drama. It was filmed in a very naturalistic style with few frills, although Wikipedia notes that reconstructing 1960 Nigerian style was a rigorous. But it’s also a fascinating, if predictable story.

The narrative is mostly anchored by the point of view of retired police detective Dan Waziri, a great character played a great actor, Sadiq Daba. Waziri is charged by a committee of odious British officers with solving the serial murders plaguing the community of Akote.

As I said, it’s easy to see where the story will go, although there was quite a twist or two thrown out way. The notably good thing about the movie was the milieu and what it can teach us about history.

I’m afraid we have one horrific villain in all this film: colonialism. It is the British authorities that condescend to Waziri and subsequently cover up the dark truths he uncovered. It is the tensions between the local Igba and Yoruba people, exacerbated by the British occupation of Nigeria, and resulting in the scapegoating and death of a traveling ‘Northerner.’ Above all, you find it in the killer himself, whose childhood abuse at the hands of British clergy molded him into a serial killer with deadly compulsions (an admittedly terrible and shortsighted motivation for becoming a serial killer, but there we have it.)

Chillerpop takes your questions and comments here on this blog, on his Facebook page, and on Twitter (@ChillerPop).
If you have a burning desire to add October 1 to your video library, or to support this blog by browsing and shopping via these links, please consider clicking the image below: