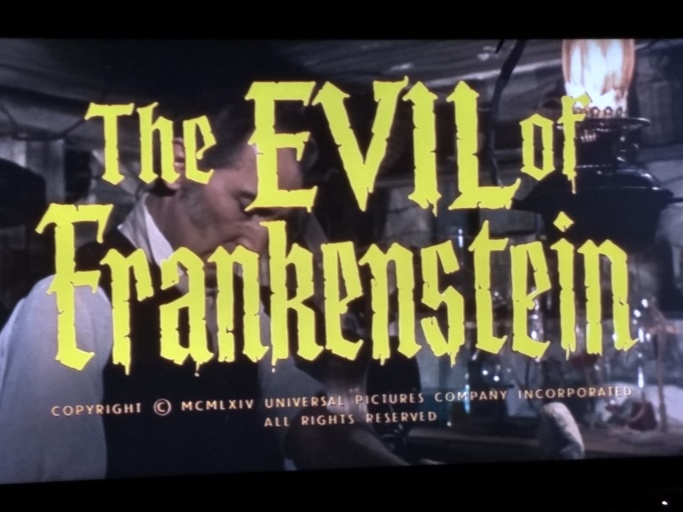 The Evil of Frankenstein

Year: 1964
Writers: Anthony Hinds
Director: Freddy Francis
Notable Cast: Peter Cushing, Sandor Elès, Peter Woodthorpe, Katy Wild, Duncan Lamont, Kiwi Kingston,
Plot: Penniless, Baron Frankenstein, accompanied by his eager assistant Hans, arrives at his family castle near the town of Karlstaad, vowing to continue his experiments in the creation of life. Fortuitously finding the creature he was previously working on, he brings it back to a semblance of life but requires the services of a mesmerist, Zoltan, to successfully animate it. The greedy and vengeful Zoltan secretly sends the monster into town to steal gold and ‘punish’ the burgomaster and the chief of police, which acts lead to a violent confrontation between the baron and the townspeople. (SOURCE: IMDB and Written by Doug Sederberg <vornoff@sonic.net> )

As much of a fan as I claim to be of Hammer Horror, I never really delved into their Frankenstein output, always too dazzled by their sexy vampires and tales of black magic. So, when Evil of Frankenstein was available on STARZ, I delved.  A little research revealed that it’s not well regarded within Hammer’s Frankenstein series. Perhaps with a few more under my belt I will change my tune, and yet, I liked this a lot.

Here’s what I came away with:

I was impressed by the opening sequence. If you are a child with no exposure to horror movies, it has to be frightening. You are treated first to the beautiful, wonderful lush gothic visuals that you expect from Hammer. You have a dark corpse stealing scene, witnessed by a young girl. The girl screams and runs off, only to encounter Peter Cushing as Baron Frankenstein in a very menacingly framed shot, looking like he’s about to abduct her or worse. I can see how that would result in kindertrauma.

It’s delightful to see Peter Cushing in a villainous role instead of the steadfast professorial monster-hunter. I may have read the film wrong but this time he is evil and morally compromised, and this had to be an interesting turn for him. As for The Monster, it was played by a New Zealand professional wrestler by the name of Kiwi Kingston and he lends the monster a great physicality.

The movie also has what I consider my favorite laboratory creation scene to date: the lab has a very vibrant technicolor design. As The Monster is being willed to life in a storm and flurry of lab equipment functions, we see the Baron squeezing a heart inside of a fishtank.  It is such a unique image

In my viewing, I have encountered very few “Igors”, and this film doesn’t have one either. This movie has actor Sandor Eles as the Baron’s assistant, Hans, who is a handsome and aristocratic-looking, youthful man. I felt there was a pseudo homoerotic tension between the two, much like between the novel’s Victor and Henry Clerval. Even when they flee together in a carriage following the mayhem of the movie’s opening sequences, they pass these alpine vistas which hearken to the Romanticism of Shelley’s novel.

The film also presents a bizarre town of carnival folk, who are explicitly poor. You have a wild and unkempt beggar girl that never speaks. This is saying something about poverty or feaudalism or whatever, but what? The film takes a strange turn with the introduction of the mesmerist Zoltan, who ends up making the Monster perform his crimes.