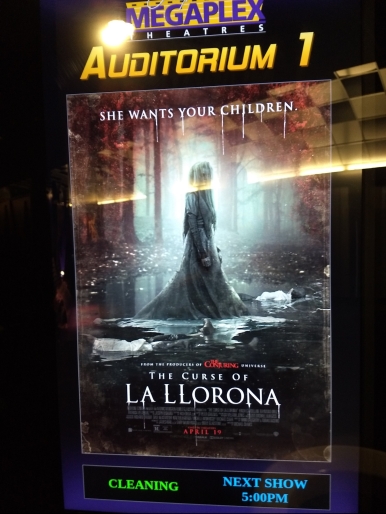 As of this writing it has been one day since Lorraine Warren – half of the infamous duo responsible for the ‘true haunting’ tales inspiring the billion dollar Conjuring franchise – has died. I’ve been observing many social media messages not only mourning her death, but pseudo-canonizing her as some sort of spiritual warrior to fight evil in the beyond. There are also reminders out there of the Warrens’ con-artistry, and unfortunately, worse than that.

Stepping out of that debate, Lorraine’s death coincided with opening weekend of The Curse of La Llorona, a spin-off of the “Conjuringverse” and one that’s surprisingly free of many of the typical tropes of this franchise.

Commentary [WITH SPOILERS]: I enjoy Conjuringverse movies, but they can be tedious. The franchise brings on a judgmental faux Roman Catholic morality and some of that good old satanic panic on which the Warrens made their career. Also, I was prepared to cringe at this film’s treatment of the La Llorona myth, a legend that stems from Mexico and that is also found in the Chumash Native American culture of Southern California.

The plot and characterization were fairly thin. I’m not convinced they really needed to be more complex. The Tate-Garcia family are Anna (played by Linda Cardinelli) and her children Chris (Christou) and Samantha (Kinchen). Anna is a widow; her husband, a police officer, died a hero in the line of duty. She’s a social worker and a good mother (and rocks bell-bottoms with style.)

Fictional Ed Warren tends to shame non-nuclear families, so I’m happy he was out of sight in this one.

Ultimately, her efforts to help Patricia, a Chicana single mom and her two sons went horribly awry, dooming Patricia’s boys and bringing a horrific curse onto her own brood. That resulting horror and its resolution was entertaining. The Conjuring movies have their rote tricks and jump scares but here they worked well. The film was well shot, and like its previous franchise chapter The Nun, it actually achieves a very gothic atmosphere, despite its early 70’s Los Angeles setting.

A majority of the gore-less horror action involves kids. As with The Conjuring 2, I think this movie is in that rare sweet spot of scaring the hell out of tweens at slumber parties but remaining appropriate.

But perhaps the most remarkable part of The Curse of La Llorona involves its link to the Conjuringverse: one Father Perez (Amendola), last seen in Annabelle. The good Padre has the grace and open mind to acknowledge that Catholic bureaucracy can’t help Anna and her children in time, so he defers sectarian jingoism and refers her to a curandero, Rafael Olivera (Raymond Cruz).

I know very little about curanderismo; my very basic understanding is that it encompasses any shamanic healing practices across various cultures. Many of its practitioners maintain Roman Catholicism as their primary religion. I found it interesting that this healing practice wasn’t shamed or blamed for the spiritual evil, and that the Roman Catholic church – or the Warrens as presumptuous self-appointed proxies of the church – didn’t present as the ultimate savior. Satanic panic dictates that any occult practice is ultimately of the devil.

Flaps and controversies have already erupted around curanderos in the movie, and practitioners themselves can be found on both sides. To my limited understanding and context, I thought the film was respectful enough. Controversy has also stirred around the movie being a white woman’s story while driven by a Mexican folk legend and Latinos around her. A fair point, but at the very least, this was no white savior story and unlike Candyman, the character of Anna wasn’t a tourist in this community.

What We’re Afraid Of: The tale of La Llorona is a cautionary tale for kids to stay aware and not wander off and remain within the boundaries of what they know is safe. La Llorona also speaks to the awful societal fear and shame of women willing to kill their own children, which goes back to the Greek myth of Medea. In this movie, La Llorona is all about motherhood anxiety. Patricia is the one to think about here, not Anna. Anna bungling resulted in Patricia’s children’s doom, and then she made a pact with La Llorona to return her sons in exchange for Anna’s children. Awful, isn’t it? What would you do to get your children back?