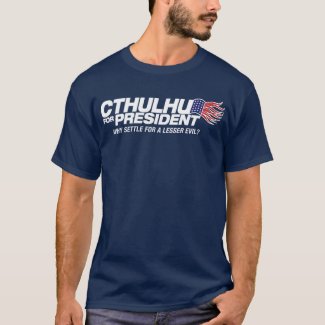 cthulhu for president – why settle for a lesser ev T-Shirt

Note: this post was originally written March 3, 2010 when I started this blog on the now-defunct platform, Open Salon. It was my second post ever. It’s a badly written piece but I’m interested in how I saw all the resentment and paranoia against President Obama mirrored in Lovecraft’s tales. There are certainly now in 2019 more dire parallels.

“The general tension was horrible.  To a season of political and social upheaval was added a strange and brooding apprehension of hideous physical danger; a danger widespread and all-embracing, such a danger as may be imagined in only the most terrible phantasms of the night.”

I thought of making Haute Cthure a semi-regular feature in this blog to discuss everyone’s favorite anxiety-ridden horror master, H.P. Lovecraft.   The idea is to pair an item or an article of Lovecraft inspired clothing with one of his works, or an adaptation/spin-off thereof.

Lovecraft, a virulent hater of other races, immigrants, poor white trash and seafood, has had a cyclopean impact not just on the horror and sci-fi genre, but on pop culture and the subconscious.  Hence, ‘Haute Cthure’: there is a large amount of Lovecraft inspired apparel and memorabilia out there.  It’s geek kitsch to be sure, but I think there’s something else going on.

First, the clothing item: the satirical election t-shirt, as seen above, available on Zazzle.  These t-shirts embody for me what makes Lovecraft’s work so viable today.  Cthulhu, Nyarlathotep, any one of his unpronounceable, vaguely described and horrific creations make powerful symbols for anyone to use.  He classifies them not simply as monsters, but “Gods”, and yet they’re further removed from humanity than any deity ever conceived of by humans.  They’re purposeless, nihilistic, evil, powerful and weirdly wonderful in their own way.  You can project your fears onto them, or use them for protest purposes.  Many a merry prankster has used them to satirize evangelical Christianity or make political statements.   In a triumph of complex carbohydrates over seafood, some atheists have invented the “Flying Spaghetti Monster,” a derivative tentacled entity.

Now the Lovecraft work of fiction: I have to confess, the story was chosen through sheer laziness.  I have a very tough time getting through the author’s florid and dense prose and undynamic plots.  I decided to try Librivox.org, the free public domain audio books site, and at a blessedly short 9 minutes, I downloaded “Nyarlathotep,” first published in the November 1920 issue of The United Amateur, as narrated by Librivox voice volunteer Peter Piazza. [NOTE: Mr. Piazza’s narration of the story appears to be down. You can find other versions of the story in audio here.]

Mr. Piazza did an excellent job.  He voiced the story with an over-the-top, highly dramatic paranoid intonation that was perfect for the material.  He felt all that teeming dread and he made sure his listeners did too!

And the story offers some uncomfortable modern day connections.  Nyarlathotep, in this iteration (he appears in other works later), is nothing more than a “swarthy” “lean” resurrected Pharaoh from the Middle East:

And it was then that Nyarlathotep came out of Egypt. Who he was, none could tell, but he was of the old native blood and looked like a Pharaoh. The fellahin knelt when they saw him, yet could not say why.

He wanders unnamed cities to spread “science” and preach the word of The Great Old Ones.  Everyone he encounters becomes nervous, afraid and insane – some disappear mysteriously – and entire civilzations collapse after he passes through.   There’s a “daemoniac alteration in the sequence of the seasons.”  These fears, this nightmare, sound vaguely familiar , no?

(As an aside, it strikes me that Lovecraft’s monsters rarely do anything to anyone  – and readers, correct me if I’m wrong because I haven’t read the entirety of his work.  Just their mere presence, the hint of their existence, causes a complete and total mental breakdown.  I love that! That’s more badass than Jigsaw or Freddy Krueger.  Imagine what that would imply for the torture-porn genre?)

But back to my point: now, part of me wishes I hadn’t made these horrible connections.  Our political discourse has been railroaded by a fevered delirium of intangible fears – Eastern origins of birth? Check.  Sinister ideologies? Check. False prophets? Check, though to be fair, that’s a story as old as time. [NOTE: links updated, since when I first published this, I thought nothing of linking to shitty, damaging conspiracist sources.]

If he were around today, H.P. Lovecraft could very well have whispered his mad tales into a megaphone to a highly receptive audience that would take his visions for fact.

“I have a very tough time getting through the author’s florid and dense prose and undynamic plots.” I do know exactly what you mean–sometimes I have to read some of HPL’s sentences twice, slowly, to understand what he’s saying; and sometimes several pages go by without anything actually happening–but boy do I love me some Lovecraft.

I’m hoping you’ll also blog about Ligotti sometime. That man is a genius.

Thanks Ranjit – HPL takes some work to get through, doesn’t it? That said, the understanding of the monsters and the concepts is so quick and instinctive, it’s almost subliminal!

Ligotti? I’m googling him right now! Not familiar with him, I’m afraid.

Wait, did I write this and forget? Just kidding, of course, but you’ve hit on so many of my interests–lovecraft, weird marginalia, analysis of weird trends, etc.–that I really loved and identified with your thoughts here. You’re a great writer and I’m a fan of the content. Do you write/blog anywhere else? Also, you should check out the OS resident horror expert:

Caroline, thank you! I enjoy your blog too. Nope, OS, and the four posts I have up, are my first (and very awkward) blogging attempts. I’ll definitely check out ShockRoomHorror.

You’re right, CP! Only I like yours better because of the historical references. RATED

Just read your bio. I’d love it if you’d check out my first novel, a vampire novel, of course, titled “They Just Be Killing White Folks (A Vampire Tale of Terror, Horror, and Bloodlust).” There’s a link on my OS blog. It’s published on lulu.com and can be downloaded for only five bucks.

Count on it, Diva! Can’t wait to check it out!