We’re on the day of the premiere of The Exorcist TV series on Fox (I’m frustrated that I can’t currently access it).  And as I figure out how to view it, I continue my retrospective of The Exorcist series with what I consider to be the true shame of the franchise- Exorcist: The Beginning.

How do I find this film a complete and utter piece of garbage? Let me count the ways. But first let me, in my customary lazy fashion, re-post the problematic history of the production of the prequels to The Exorcist:

a first cut of the film left the Hollywood execs crying foul, believing there to be no where near enough blood, gore, and shocks to befit the series.  Instead of letting Schrader conduct reshoots, or perhaps because Schrader did not believe such scare tactics were necessary, script rewrites and reshoots were ordered with a new director, Renny Harlin (Die Hard 2: Die Harder and The Long Kiss Goodnight), given the helm. (Source: the good scholarly folk of It’s Just Playing, But With Research).

And so, we got a major cinematic release that was stupid to its very core.  Something that sought to turn everything about one of the greatest American films ever made into a Wal-Mart product intended to satisfy the Saw generation.

Consider the “Kewl!” opening scene above.

Sorry, but I’m unimpressed. The story of the original film at its heart a very personal horror. It is an invasion of spiritual brutality into one woman’s private family life.

The Exorcist was NOT fucking Lord of the Rings, and this bombastic CGI crap lends it no weight whatsoever. 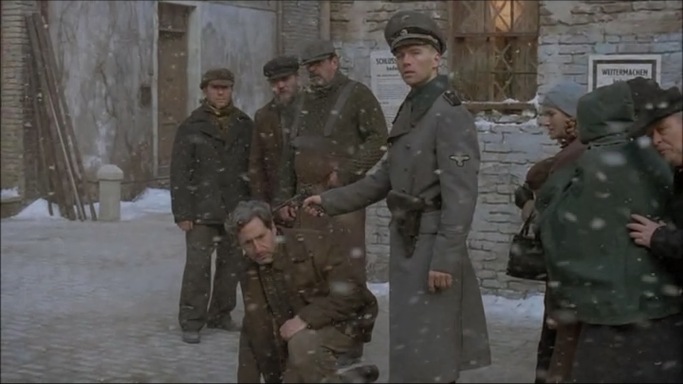 Next, let’s talk Nazi Germany.  Both Beginning and Dominion create a past for Father Lancaster Merrin, one that involves a Holocaust-related atrocity.

In the context of Harlin’s film, it’s so empty, manipulative and stupid that it borders on offensive. It makes the conflict of faith experienced by Arnold Schwarzenegger’s character in End of Days appear way deep, yo.

But if there’s one part of Exorcist: The Beginning that can amuse – no, make you howl in hysterical laughter – it’s the final sequence.  The possession and exorcism scenes fit perfectly in a John Waters film like A Dirty Shame.  It was perhaps someone’s idea of shocking, evil blasphemy but to me it was amazingly tasteless camp, and all the more precious because it was never intended to be so.  View it here in a Spanish language cut that seems to have evaded the Youtube censors.

One thought on “Pink Pazuzus: The Chillerpop Exorcist Restrospective, Part 4”